A cousin of mine in South Africa forwarded this blog post.

South Africa Rolls Out the Ubuntu in Abundance

I went on a rant the other day regarding the cost of the 2010 World Cup versus all the critical needs South Africa is facing and whether or not the most vulnerable of this country would gain anything from having the World Cup hosted in their country. At that time, I also had some very positive things to say about our hosts for the 2010 World Cup and I wanted to share that side of the coin as well, because it is equally important.

To say that I have been blown away at the hospitality South Africa has shown the rest of the world would be an understatement. I think back on recent Olympics and struggle to remember much reporting in the USA of athletes from other countries. I remember when a Togolese guy won a bronze medal in kayaking and NBC reported it and I thought to myself, “where are all the other fascinating stories like this one…like the Jamaican bobsledding team.” In today’s America, sadly, we have drifted so far towards being so US-centric that we only seem to root for the Americans.

Not so here in South Africa. I’ve been here since early May and each week I have become more and more impressed with the global embrace that South Africans have offered up to the world. On the way to the airport a couple of weeks ago, I heard a radio program that said each day they would focus on one country that would be coming to South Africa for the World Cup, and they would explore not only that sport’s history in soccer, but also their politics, religion, and socio-cultural practices. On the television, I’ve seen numerous programs that focus on a particular country and it’s history of soccer and how the history of that country is intertwined with their soccer history. I’ve seen programs on India, exploring why India enjoys soccer but hasn’t really excelled at the global level… yet. And I’ve seen shows on soccer in Muslim countries. Maybe it’s planned, maybe it’s unplanned, maybe it’s by chance, but it is happening. It’s not just about South Africans showing off their varied and multifaceted culture to their global guests, it’s also about using this opportunity to educate South Africa on the rest of Planet Earth’s inhabitants.

As I moved through my work here in the provinces over the last six weeks, I had a pivotal meeting with the Board members of a rural NGO. They were explaining their guiding program philosophy of Ubuntu. No, not the Linux program. I’m talking about the traditional African philosophy of Ubuntu that essentially says, “No man is an island.”

I found a better explanation from Wikipedia:

One of the sayings in our country is Ubuntu – the essence of being human. Ubuntu speaks particularly about the fact that you can’t exist as a human being in isolation. It speaks about our interconnectedness. You can’t be human all by yourself, and when you have this quality — Ubuntu — you are known for your generosity.

We think of ourselves far too frequently as just individuals, separated from one another, whereas you are connected and what you do affects the whole world. When you do well, it spreads out; it is for the whole of humanity.

To me, Ubuntu is the acceptance of others as parts of the sum total of each of us. And that is exactly what I have experienced during the lead up to, and the initial days of this World Cup. There is nary a South African citizen that I’ve met on the street, or in shops or restaurants or hotels, that hasn’t gone out of their way to greet me and make me feel like I am home. And I don’t mean that in the trivial, “Oh, aren’t they nice, homey people here… ” sort of way. I mean real, genuine interest and questions. People seriously want to know where I come from. What it’s like where I live. How does it compare to where I am now. What do I think of South Africa. Oh yes, and what do I think of Bafana Bafana… The questions and conversations are in earnest. They are honest. And they are had with enthusiasm and a thirst to know more. South Africans are drinking deeply from the cup of humanity that has been brought to their doorstep. I would never imagine that an American World Cup or Olympics would ever be this welcoming to the rest of the world. And that saddens me for the state of my home country, but it also makes me feel the pride of the South African people.

I have been truly humbled on this trip. And while I have my gripes regarding development here, I cannot say one negative thing about how South Africa has handled its duties as host and hostess to the world. If I could say one thing to sum up being here during this once-in-a-lifetime experience, it would be that I’ve learned the value of Ubuntu, and that when found and offered in abundance, the world is indeed a better place to live in.

So, if South Africa accomplishes nothing more on the playing field, it will still have won as a host country. I am a cynic, no doubt about that. And yet I have to admit, I’m a little teary just writing this because I leave for home next weekend and I will be leaving a little piece of myself here in South Africa. I just hope I have learned enough to bring back a little piece of Ubuntu to my homeland, where perhaps with a little caring and a little water, it will take root as naturally as it does here, in the cradle of civilization. It’s funny, many people in America still ask me, “are the people in Africa very primitive?” Yes, I know, amazing someone could ask that but they do. And when they do, I usually explain that living in a mud hut does not make one primitive, however, allowing kids to sell drugs to other kids and engage in drive-by killings — isn’t that primitive behavior? I think it is. When I think of Ubuntu and my recent experiences here, I think America has much to learn from Africa in general, in terms of living as a larger village; and as human beings who are all interconnected with each other, each of us having an affect on our brothers and sisters.

As the 2010 Cup slogan goes, “Feel it. It is here.” Well, I have felt it, because I am here. Thank you South Africa, for giving me this unexpected gift. I am humbled.

Every day on my air shift I read five newscasts from the Associated Press, so I am very familiar with the concept that, “if it bleeds it leads”.  Invariably, the news coverage from South Africa gravitates towards the terrible fallout from apartheid, the violence, the AIDS crisis, the corrupt government, the crumbling infrastructure.  This is true of news coverage of other countries too, where the negative is treated as more newsworthy than the positive.  During the coverage of the World Cup in South Africa, despite the running commentary on the vuvuzela, reporters haven’t missed an opportunity to point out the problems that South Africa still faces in its comparatively new democracy, and to keep picking at the old wound of apartheid.  How refreshing, then, to read Shari Cohen’s warm account of the generosity of South Africans.

It’s true; many people have commented to me, both while I was living there and subsequently, on the out-going nature of South Africans, how they will open their homes and hearts to visitors.  It’s also at the core of how friendships are formed.  A chance meeting will form a connection, which will lead to an invitation to tea in someone’s home, and from that, with give and take on both sides, the firm foundation for a lasting friendship is gradually formed.  And they are friendships that endure time and distance. 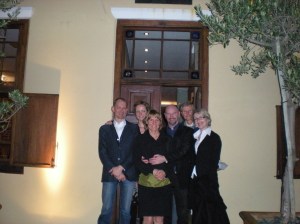 When I go back home, I pick up with my dear, dear friends as if I had just seen them last week, and the same is true for old South African friends in places as far-flung as England and Australia.  Shortly after I came to live in the States, I was living, for a short while, in Wheeling, WV, where another South African had settled.  In the way I have described – an initial introduction, a connection, tea, berry picking, dinner – we formed a quick bond in a way that was very familiar from our experience of forming relationships in South Africa.  This has been something that I have found difficult to replicate with Americans.  There is a social ease and friendliness, to be sure, but it doesn’t seem to take root with that deeply interested, probing flow of ideas that Shari Cohen describes so well in her piece.  I sometimes feel as if I have made people recoil by coming across as too intense in pursuit of friendship here – and I am, actually, rather reserved by nature!  It is simply an inbred fascination with how other people think and feel, which is part of the Ubuntu that is South African.