Broadcasting from the nation’s capital

I hope I can remember how to do this!  I see it’s been more than a month since I last posted anything.  That’s because I’ve been living a double, sometimes treble, life.

On Wednesday, May 4th, I started “moonlighting” at Sirius XM satellite radio as a temporary fill in for two months while Martin Goldsmith is in Europe researching a new book.  It’s a tremendous opportunity and the organization of the facility and the company reminds me of the best things about working at the SABC in Johannesburg.  The Sirius XM studios in DC are in an old, renovated printing factory, and it’s all open plan and very cool and edgy.  The studios are state of the art, and everything – this is very different from when I was still at the SABC – is done on computer.  I quickly had to learn a new system called Dalet 5.1, which is a creation that comes out of Israel and France. What happens is that the Program Director loads the music onto the computer and then the announcers come along, pull up the program and slot their voice tracks into it.  This happens in a little self-contained Assembly Room and it’s just you and the computer and your headphones … and away you go.  I go down and do this three times a week to record two shows each on Tuesday and Thursday and then three shows on Saturday.  I get up at 4.45, catch the MARC commuter train down to DC, take a Metro ride on the Red line to New York Avenue station, walk the short distance to the studios, and I’m usually recording by 8 a.m.  Then I take the Metro back to Union Station to catch the 12.25 p.m. train back to Baltimore, pick up my car and drive over to WBJC for my air shift there.  It’s hectic, especially given all the preparation of the music logs that has to go into each shift, but it’s thrilling to be working in the nation’s capital, and I’ve become quite the expert commuter.

When all this started I was still coming to the end of the Spring semester for my MFA so I had that plus two different jobs in two different cities, so that was a challenge.  I had planned to do some Independent Study over the summer but DB talked sense into me and made me realize that it would simply be physically impossible to do all three things.  As it is, it’s taken me time to find a rhythm and routine but it’s really been a tremendous experience to be exposed to another form of broadcasting like this. 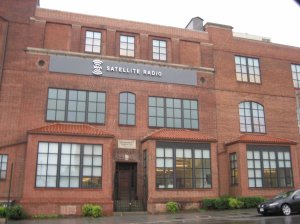 And I have also managed to find a little time to play.  For one thing, I have bought the complete collection of Joan Didion’s writings in a wonderful Everyman Library hard cover edition.  It is an absolute treat to read … and utterly daunting because she is so brilliant and vivid and detailed and wry, and puts you right into the moment she is creating.