The name Garrison Keillor means nothing to most people outside America but he is an institution here.  He’s a writer, and when he couldn’t find work back in the early 70’s he got together with a group of friends and started putting together a very rough and ready radio show called A Prairie Home Companion (there was a movie inspired by it with Meryl Streep and Kevin Kline some years back) and it’s now, 37 years later, a phenomenal success.  It’s broadcast live on National Public Radio at 6 p.m. every Saturday for two hours, and it’s a mix of music, skits, sound effects, story telling, satire and fun.  It’s based in Minnesota, but they go on the road too, and we went to see it over the Memorial Day weekend at the open air venue, Wolf Trap, near Washington.

The show was scheduled to start at 5.45 p.m. sharp, and at exactly that time (DB pointed to his watch!) he ambled onto to the stage, where the band had been playing warm up music, in his signature red shoes and tie.  He then proceeded to meander through the crowd of thousands (literally – they spill out onto the lawns behind the theatre where we had seats) with a female vocalist, and they sang duets for 45 minutes until it was time to go live.  (He was a tiny bit concerned because they arrived on stage with a few minutes to spare, rather than dead on time – the precision of live broadcasting!)  It was all a delight.  The band was very good, there was a gifted young tenor who sang everything from opera to Paul Simon, a trio of women who sang contemporary folk music, there were little drama skits with sound effects man, Fred Newman, who can just create anything – often with his mouth alone.  Then Garrison Keillor did his set-piece monologue about the fictional town of Lake Woebegon, where “all the women are strong, all the men are good looking, and all the children are above average.”  It was pure, seemingly off-the-cuff story telling.  The whole show was sheer fun and professionalism, and I was fascinated to see all the logistics of the radio side of things.  It took me back to my days of radio drama directing!

I have confessed before to being an Emanuel Ax “groupie”.  He was one of the first big names I saw and heard when I came to live in the States.  We went up to Chicago to hear him give a recital in Symphony Hall there, and I was so overcome as he walked on stage in his self-deprecating way and sat down to play that I couldn’t see him through tears for a while.  Since then I’ve heard him at a rehearsal with Yo Yo Ma and Pamela Frank for the farewell concert of David Zinman with the Baltimore Symphony, and at a recital at Bucknell University in PA.  When I served briefly on the Artistic Committee for the Shriver Hall Concert Series I put him on my wish list – and he came!  And we always go and hear him when he plays with the Baltimore Symphony.  One time was just after 9/11, and he was opening the season.  I had the wonderful opportunity to interview him before that concert, and he is as humble and unaffected as he seems on the stage.  It was more than wonderful to meet him.  Well, we went to hear him again with the BSO a couple of weeks ago, playing the Brahms 1st Piano Concerto, which is so massive and symphonic, and it was a joy, as always, to hear him.

We also went to the final concert of the BSO’s current season – we have hardly been to hear them all season and then went two weekends in a row!  It was the Verdi Requiem, which I had never heard live.  It’s a gorgeous, very operatic piece, and seeing the percussionist beating the you-know-what out of the bass drum in the Dies Irae was quite something! Also the trumpet choirs playing from the balcony were a tremendous effect. The young soprano was Angela Meade, who had been one of the winners of the Met Opera National Council Auditions and had subsequently filled in at the Met in Verdi’s Ernani.  She came into the studios for an interview beforehand, was very engaging, and sang wonderfully we thought.

And then the most recent “play” was to go and see the legendary Royal Danish Ballet at the Kennedy Center last weekend.  I have known of them for years, and of Auguste Bounonville, and his Romantic ballets like La Sylphide, Le Conservatoire, The Flower Festival in Genzano and Napoli.  DB wasn’t so keen because he had never heard of him and didn’t know the music, but he indulged me and I was just thrilled to go – especially since it is rare to see them here; they haven’t been in the States for almost 20 years.  So, we went to see Napoli, or The Fisherman and his Bride.  I only knew the music from the last act, and it makes sense because that is certainly the most engaging act of the ballet, but it was really fascinating to see the technique, which is very precise and structured – one can see the architecture of the dance.  The dancers are very disciplined and the ensemble is excellent, and I was so struck by their musicality, truly dancing with and through the music in a way that should be a given, but is not necessarily so.  The ballet itself is a bit of a curiosity in a Romantic kind of way (even though their new Artistic Director, Nikolaj Hubbe, who is Danish but used to be a Principal with the New York City Ballet, had updated it to the 1950’s) and it is clearly a period piece. Yet seeing the remarkably high standard of the company transcended that.  It seems to work out that we make a yearly pilgrimage so see ballet somewhere, and this was certainly a highlight. 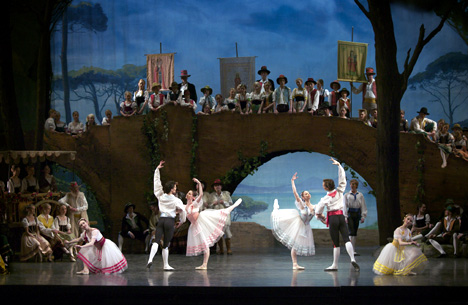