If it weren’t for television and the fact that I was reading the weather report during the newscasts on my radio shift yesterday, I would have been blissfully unaware that Hurricane Irene was barreling towards us.  Yesterday was a sunny, still, late summer day.  Even this morning, although it was overcast, it was still.  As I have been sitting looking out of my study window, I have seen the skies darken, the wind begin to whip up, and some rain has begun to fall.  But it still doesn’t suggest the potential devastation – or the havoc that has already been wrought further south on the East Coast.  So, we just wait. 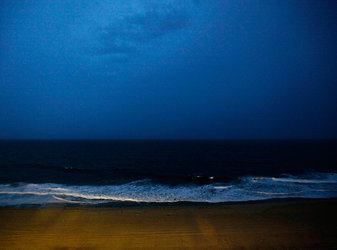 An early morning view of the beach in Ocean City, Md. taken by Patrick Semansky of the Associated Press

By the time Hurricane Irene got to Maryland after midnight, it was over the sea and didn’t make landfall, so it was not as bad as if could have been.  As it passed by, our neighbors’ shutters were banging in the high winds, and the birch tree was lashing our bedroom window, but we didn’t have the dreaded power outage (I hope I’m not speaking too soon!) and no flash flooding, despite the relentless rain all day and the torrential rain at the height of the storm.  As it has made its way up the coast it seems to have stayed out to sea for the most part, and spared the much feared hit of Manhattan.

It was certainly fierce but really not so much worse than the winter storms that often hit Cape Town in July and August.  Those are also accompanied by winds that make it difficult to stand upright, when an umbrella is pointless because it just blows inside out all the time; I remember Jonathan doing a very skillful jousting effect with an umbrella in the high wind on one occasion!  During the time I was living in Cape Town two shipwrecks were driven onto the rocks around the Cape Peninsula.  (One was turned into a restaurant for a while, and then turned into an ecological site before it was eventually broken up.)  It truly is The Cape of Storms (known as the Cape of Good Hope – a misnomer if ever there was one) and the stuff that legends are made of.

According to some sources, the 17th-century Dutch captain Bernard Fokke is the model for the captain of the ghost ship. Fokke was renowned for the speed of his trips from Holland to Java and was suspected of being in league with the Devil. The first version of the legend as a story was printed, in Blackwood’s Edinburgh Magazine for May 1821, which puts the scene as the Cape of Good Hope. This story introduces the name Vanderdecken for the captain and the motifs (elaborated by later writers) of letters addressed to people long dead being offered to other ships for delivery, but if accepted will bring misfortune; and the captain having sworn to round the Cape of Good Hope though it should take until the day of judgment.

“She was an Amsterdam vessel and sailed from port seventy years ago. Her master’s name was Van der Decken. He was a staunch seaman, and would have his own way in spite of the devil. For all that, never a sailor under him had reason to complain; though how it is on board with them nobody knows. The story is this: that in doubling the Cape they were a long day trying to weather the Table Bay. However, the wind headed them, and went against them more and more, and Van der Decken walked the deck, swearing at the wind. Just after sunset a vessel spoke him, asking him if he did not mean to go into the bay that night. Van der Decken replied: ‘May I be eternally damned if I do, though I should beat about here till the day of judgment. And to be sure, he never did go into that bay, for it is believed that he continues to beat about in these seas still, and will do so long enough. This vessel is never seen but with foul weather along with her.” 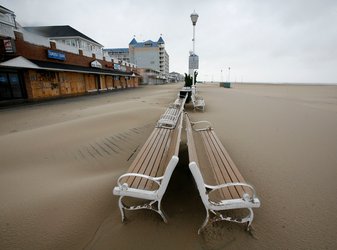 This is how the Ocean City, Maryland boardwalk looks in the wake of Hurricane Irene (photograph courtesy Molly Riley, Reuters)

This is how it looked when we visited during the Memorial Day weekend in 2010.