Outside In: Jo Smail

Jo Smail is a South African born painter. She’s been a professor at the Maryland Institute College of Art since 1988, and she sometimes asks her students: What would you choose to run off with if the building burnt down? She asked herself that question too, and the answer is: this self-portrait by Joyce Leonard. 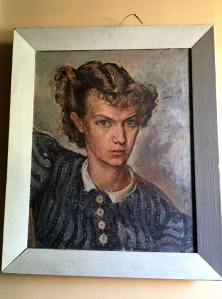 Joyce Leonard was born in Johannesburg, but trained at the Royal College of Art in London, and she painted this portrait when she was a student there. She became the mentor of several generations of South African artists, including Jo. In time, Jo’s life circled around to Joyce’s son, Julien Davis, a doctor of science and a photographer, and it was when he was offered a position at Johns Hopkins University in the mid 1980s that they came to Baltimore together.

It was difficult to begin with and, when she first arrived, Jo saw a therapist. Many, many things – too many to name one – were strange (if she had to name one, it would be the spelling!) But America had its allure. For Jo, as an artist, the best part is being close to New York City.

Her house is filled with things that remind her of South Africa: baskets, African art, beadwork, and all the myriad other stuff that is reminiscent of “home,” including Joyce Leonard’s painting. Still, if you ask Jo where home is, she responds, “Where I am now!” Perhaps the best metaphor for her mixed feelings is that, even though she is an American citizen, her wish is that she had dual citizenship.